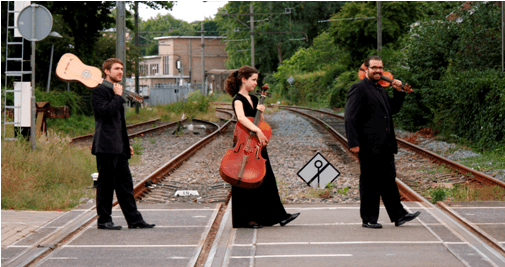 Robert King (Ed. Playford)
Select Preludes or Volentarys for the Violin by the most eminent Masters in Europe
Prelude in A Major

William McGibbon
A Collection of Scots Tunes, some with Variations for a Violin, 1746
The Flower of the forest
The Bottom of the Punch bowl
And we had been where I have been you would not been son canty
The Last of Plates Mill
Willie was a wanton wag

‘Irish Coffee’ by Javier Lupiáñez.
For any baroque music lover it is easy to listen to Italian baroque music, which is considered to be different from French baroque music, which is also different from German music… and that´s all! Three national styles… but we are forgetting the Scotch and Irish music, authors such Veracini or Geminiani were amazed with this music, for baroque musicians this music was something special, and still today, it is.
“[…] the fame harmonies, the fame modulations were practised in the compositions of the Flemish, the Italian, the German, the French and the English musicians and nothing characteristic of the genius or humour of a particular country or province […] except in those of the Scots and Irish the former where of are in a style so peculiar as borrowing very little from art and yet abounding in that sweetness of melody which it is the business of art to cultivate and improve that we are driven to seek for the origin of this kind of music elsewhere than in the writings of those authors who have treated on the subject in general terms”
John Hawkins, “A General History Of The Science and Practice Of Music: In Five …, Vol. 4” London, 1776

Scaramuccia
Scaramuccia was founded on February 2013 as an initiative by violinist Javier Lupiáñez, who seeks to rediscover baroque repertoire that is specially linked with folk traditions or rarely played.
The spirit of Scaramuccia is to rediscover as much of this repertoire as possible, bringing to life music that was heard not only in the more refined circles but also in the taverns and streets in the baroque period. There is deep research and study behind the preparation of each programme, reviving little gems of music which have long been hidden and lost in the vast and more commonly performed literature of baroque music.
Scaramuccia started in the Fringe of the Utrecht Early Music Festival 2013 and in the Fringe in the MAFestival Brugge 2013 and is developing an intense concert schedule in The Netherlands, Belgium, UK and Portugal.
http://scaramucciablog.wordpress.com/
https://www.facebook.com/scaramucciabaroque

Inés Salinas, violoncello
Inés was born in 1985 in Zaragoza (Spain), where she got in 2010 her Bachelor Degree in classical cello at the CSMA. After finishing her studies, she decided to deepen her knowledge of the historical performance of her instrument. She was recipient of a scholarship from theDiputación Provincial de Zaragoza, which allowed her to move to The Netherlands to study Early Music at the Koninklijk Conservatorium with Lucia Swarts. She obtained her Bachelor Degree in June 2013. Currently she pursues her studies on the Master’s programme at the same school, being a student of Jaap ter Linden (historical cello) and Mieneke van der Velden (viola da gamba). She has performed with the Britten-Pears Baroque Orchestra (UK), Orquesta Barroca Conde Duque (ES), and with I Giovani della Montis Regalis 2013 (IT).

Giulio Quirici, theorbo & baroque guitar
Giulio Quirici (b. 1987) studies early plucked instruments with Joachim Held and Mike Fentross at the Royal Conservatoire of The Hague.
He is continuo player in the chamber group Radio Antiqua, and performed in orchestras under the leadership of P. Pierlot, M. Fentross, S. Williams, E. Gatti and others. He also studied jazz guitar at the Conservatory of Music of Vicenza, in his native Italy, and alongside his formal studies he took courses given by world-class institutions such as the Berklee College of Music of Boston, the New School for Jazz and Contemporary Music of New York, the Hochschüle für die Kunsten Bremen, Mozarteum Salzburg, Festival Mitte Europa among others.